Running Stitch – Dont let it be a pain in your side! 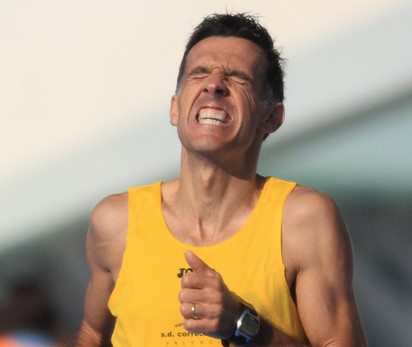 Running Stitch – Dont let it be a pain in your side!

“Beep”, a quick look down confirms another mile has been conquered and now I’m past halfway, but unfortunately geographically the next 5 miles aren’t downhill but my performance is certainly heading that way…..

I have just been stabbed in the side, I cant see any visible wound or accompanying haemorrhage with blood pouring down my leg, but surely something must have pierced my body remaining lodged underneath my lower ribs, painful and unrelenting.

My brain says it’s a “stitch” but my body feels like its a dagger!

Of course its “just” a stitch…… “ breathe deeply and rub it in a clockwise direction” was always the advice from my dad when I was a child training for cross country’s. Surely after studying medicine and being lucky enough to work in professional sport for the last 15 years, I should have a more scientific based and complex intervention than “rub it”, to prevent my “minute per mile” pace dropping by the step? Regardless of the number of Sports Medicine internationally published papers and journals I have read, am I really still having to rely upon what I was told as a 11 year old kid, by a Civil Engineer (regardless of his impressive 2 hour 40 marathon PB!) of, ….“just rub it” !
Side stitches are a very common problem among runners. For most people it is only an occasional problem but it still has the ability to effect performance and deter from the enjoyment of their run.

So what causes a “stitch” ?
A “stitch” classically presents as an ache or stabbing pain just underneath the ribs on one side and may also cause some pain in the shoulder blade region on that side.

Food– Evidence exists that by eating a large meal or drinking large volumes of sugary drinks makes an athlete more likely to experience a stitch.

Insufficient blood flow  – Traditionally it was thought that a “stitch” was a result of insufficient blood flow (ischaemia) to the diaphragm, the large muscle underlying the lungs which enables breathing by expanding the lungs. The theory suggests that ischaemia results in muscle spasm, irritation and pain. It has been proposed that by eating large meals or high volumes of fluid, blood is redirected within the body to the stomach to allow the food to be digested away from the diaphragm leaving is more susceptible to ischaemia and pain.

An Australian study back in 2006 however assessed the breathing capabilities of athletes and no difference was seen between those athletes who suffer from regular “stiches” and those who don’t. No difference was seen within the forces producible by the muscular diaphragm in either group. Side stitches are also very common in horse riders, generally a much less exertive sport than running, adding further suggestion that the ischaemic theory may not be the only possible explanation.

Ligament strain – A further theory was therefore proposed rather than a vascular cause of the pain is that because of ligaments and tissue, attached to abdominal organs, bones and muscles, are put under vertical stress and strain resulting in pain. This would also support the theory that vertical ligament “strain” may be at play related to the upright sitting posture required when horse riding. Eating or drinking shortly before starting exercise could understandably also result in irritation of the upper abdominal ligaments. It wouldn’t however explain whey swimmers also commonly experience stitches when they engage in a completely different non-vertical position cof horse riders and runners.

Sugary drinks – The sugar concentration of fluids consumed has also been shown to be linked to the severity of side stitches experienced. A stich is more likely after the ingestion of fruit juice more than after a sports drink with only a moderate concentration of sugar. The risk is even less again with no fluids at all consumed, but that brings other problems!

Spinal Cause – A further theory to explain the cause of side stitches is the irritation of spinal nerves in the back causing pain to radiate into the side of the body. A medical paper describes exacerbation of a side stitch by applying manual pressure over the spinal region. Whilst this theory may explain why horse riders and runner suffer the pain due to vertical forces through the spine it doesn’t however explain why drinking fruit juice should make it worse or why everyone doesn’t have reproducible pain by palpation round the thoracic spine.!

How to ease a stitch once it has arrived.

Breathing – Take large deep breaths in and exhale (breath out) at the same time as the opposite foot strikes the ground. This is thought to reduce the overall forces through the painful side of the body by sharing the load with the opposite side of the body and reducing any muscle spasm or diaphragm irritation.
How to avoid getting a stitch in the first place

Food–
1. Eat your pre-race or pre-training run meal plenty of time before running. Ideally this should be 2-3 hours before.
2. Avoid fatty foods or high fibre foods as they take longer to be digested, a process requiring increased blood flow to the stomach. A process of trial and error to find an “ideal” pre-running meal for that individual athlete is worth doing.

Fluids-
Whilst making sure you are well hydrated (a blog to be published soon on www.SportsMedicineNE.com avoid drinks with high sugar content.

Warm up–
A good warm up helps to ease those stitches which may be from ligament and soft tissue strains and other stress in the upper abdomen.

Breathing–
Erratic breathing may make stitches more likely to occur in addition to it also being an inefficient way to run. Attempt to regulate your breathing with a set number of steps per breath in a similar way to how swimmers combine their breathing and stroke. It helps them not to drowned and just as importantly may help you reduce your risk of getting a stitch and new PBs to be set! Try exhaling every third or fourth step or exhale when the alternating foot strikes the ground.

Spinal assessment–
If stitches are still a problem despite implementing the advice above, book an appointment with amateur runner (trier) and Sports Medicine Doctor, Dr Glen Rae www.SportsMedicineNE.com who will assess your spine to check to see if any spinal dysfunction could be playing a part in your suffering and hampering your running.

Conclusion
So the definite cause or causes of running stitches is yet been identified but it seems likely that a combination of factors are to blame with different ones to blame in different athletes, or even different causes in the same athletes between one stitch and another. Always remember that by stopping running the pain will disappear. If it doesn’t settle within a couple of minutes then you should seek medical advice immediately.

Until further more definitive medical research is available, and with current preventative recommendations being simple and pain free to implement, then perhaps “stitch sufferers” should consider a trial and error approach to identify which of the techniques work for them or just use them all.

…don’t forget however, you could always try “breathing deeply and rubbing it in a clockwise direction” …….it still works for me… and now my son ! 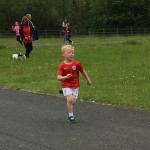